BIO’s Conference Site Committee and Conference Planning Committee are happy to report that the 2016 BIO Conference will be held in Richmond, Virginia, on June 3–5. “We’re thrilled to be coming to downtown Richmond, one of the most historic, vibrant, and culturally happening cities in the nation.” BIO President Brian Jay Jones said. “And the folks in Richmond are even more thrilled to have us.”

Working closely with Richmond Region Tourism’s Convention Services Department, the Site Committee chose the first-class business hotel, the Richmond Marriott, for Saturday’s conference events. The conference begins on Saturday morning with the plenary session and breakfast, followed by the conference panels and other events, and ends with the reception and the announcement of the Plutarch Award winner.. The day includes a luncheon featuring the keynote address by the 2016 BIO Award winner (stay tuned). 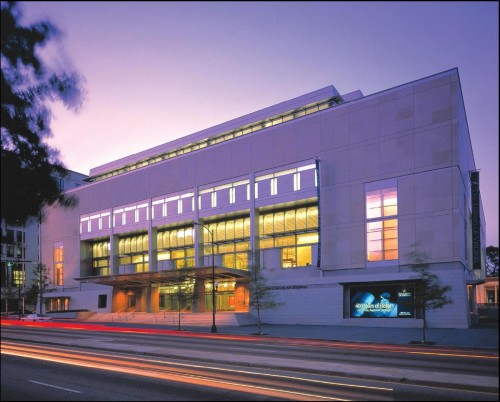 The Library of Virginia’s current home is its fourth since its founding in 1823.

The Friday evening reception will take place at the Library of Virginia on Broad Street, just three blocks from the Marriott—and a stone’s throw from the Thomas Jefferson-designed (and recently renovated) Virginia State Capitol. The Library of Virginia is a state-of-the-art facility built in 1997 that houses 400 years of Virginia history—a combination of Virginia’s Library of Congress and National Archives. The LVA Special Collections Department is planning to display some of the library’s treasures at the Friday night reception.

On Friday afternoon, conference attendees may take part in three specially designed archival tours: at the Library of Virginia; at the historic and beautiful Hollywood Cemetery, the final resting place of two American presidents, six Virginia governors, two Supreme Court justices, and twenty-two Confederate generals; and the newly renovated and expanded Virginia Historical Society, the fourth-oldest state historical society with an extensive collection of materials of interest to biographers.

New this year: A Sunday late-morning Biography Fest brunch at Richmond’s Hardywood Park Craft Brewery not far from downtown. On tap—aside from award-winning craft beers—will be short presentations by BIO members with books in print and a book-signing hosted by a Richmond independent bookseller. The Biography Fest will be free and open to the public.

Richmond, which is about a two-hour drive south of Washington, DC, and within a day’s drive of half the US population, is easy to get to by plane, train, bus, or car. Richmond International Airport, only fifteen minutes from downtown, offers nearly two dozen non-stop domestic flights from seven major airlines. Richmond’s Amtrak station and the Greyhound/Trailways station are both located downtown.

Excellent and eclectic restaurants abound in and around downtown Richmond. For a rundown on some of the newest, go to this recent article in Bon Appetit. In addition, BIO’s Dean King, who lives in Richmond, wrote an informative article on the city.
BIO members will find two terrific independent bookstores close to downtown:Fountain Bookstore in the Shockoe Slip Historic District, and Chop Suey Books  (which will co-host the Sunday Biography Fest) in Carytown  adjacent to Richmond’s Museum District, which features the world-class Virginia Museum of Fine Arts.

“I would strongly suggest that folks take advantage of the great conference room rate at the Marriott, just $139 a night for a single or double, and come to town early to take in the history and culture in Richmond, as well as the Friday BIO tours and reception,” Jones said. He added that the Site Committee is working with several other top Richmond hotels on special rates for BIO conference attendees.

After the Planning Committee nails down the panels, panelists, speakers, and special guests, we’ll provide a run down in coming months’ The Biographer’s Craft.

Marc Leepson is BIO’s treasurer. His most recent book was What So Proudly We Hailed: Francis Scott Key, A Life.