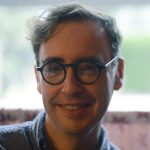 Michael Gately is the executive director of BIO, since January 2020. His duties include working with the Board and its committees to organize the annual conference and other events, and to coordinate BIO’s awards and programs. For five years at the Leon Levy Center for Biography, Gately was program director and deputy to the executive director, Gary Giddins. He is now writing a book about Woodrow Wilson and cycling in the 1890s, and he also works full-time as an administrator at Columbia University, where he is the assistant director of the Center for American Studies. You can email him at execdirector@biographersinternational.org

In October 2021, Holly Van Leuven became the third editor of BIO’s publications, replacing Michael Burgan who had held the position since taking over from James McGrath Morris, TBC‘s founding editor. Van Leuven currently serves on BIO’s board and was the inaugural winner of BIO’s Hazel Rowley Prize. Her winning proposal for that prize eventually became Ray Bolger: More Than a Scarecrow, published in 2019 by Oxford University Press. On assuming the editorship Holly shared: “Since I wandered into my first BIO Conference, I have been happily surprised by the respect given to everyone who finds their way to the BIO community, and by the sense of both joy and seriousness that pervade most of the organization’s proceedings. I hope at least a little of that spirit will be felt every time readers open an issue that I have the honor of editing.” You can email Holly at editortbc@biographersinternational.org

Lori Izykowski is BIO’s first paid administrator and membership coordinator. She began supporting BIO in February 2012, when she was with the University of Mary Washington (home to the Great Lives Series). In addition to her part-time work with BIO, Lori works full time as a Project Control Specialist in Stafford, Virginia, for a government contractor, and has another part-time job (Saturdays) in a custom-framing shop.

Izykowski works closely with BIO’s president, committees, and BIO’s publications editor Holly Van Leuven on membership management, support leading up to and at the annual conference, and other program support as needed.

To find new members, Lori relies partly on BIO’s Facebook page, where book reviews and news about biographers appear regularly. But she also depends on leads sent to her by BIO members who know of a candidate who might like to join. So, if you know of a biographer – published or unpublished – please send their contact information to lori@biographersinternational.org

Margaret Moore Booker, who lives in Oracle, Arizona (just outside Tucson), is a freelance writer who authors books on art and architecture (now primarily relating to the American Southwest). For the past fifteen years, her “bread and butter” employment has involved copy editing, proofreading, ghost writing, and writing indexes.