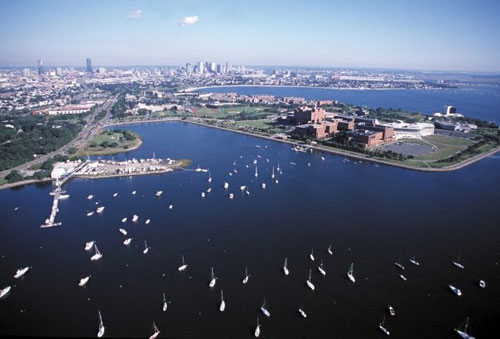 The scenic waterfront campus of UMass Boston will once again host the Compleat Biographer Conference.

The Program and Site Committees have begun their work on putting together the 2014 Compleat Biographer Conference that will be held in Boston on May 16-18. Returning to the campus of the University of Massachusetts Boston will be special, said James McGrath Morris, BIO President. “This will mark our fifth conference and the fifth anniversary of the formal establishment of Biographers International Organization. All of which took place on the campus.”

As with past conferences, Friday, May 16, will be devoted to research workshops at archives, libraries, and historical societies around the Boston area, with a reception in the evening. The actual conference will take place on Saturday, May 17, and a series of master classes will be offered on Sunday, May 18.

Hosting the event, which means dealing with endless and complicated logistics, will be members of the Boston Biographers Group who have agreed to serve on the Compleat Biographer Conference Site Committee. Already they secured the conference site as well as a place for the popular conference eve function, according to Ray A. Shepard, the committee’s chair.

The conference will also witness the fourth transition of leadership. In 2010, when BIO was established, Debby Applegate served as its first president. Her term was followed by that of Nigel Hamilton who served as president from 2010-2012. Morris was elected in 2012 and his term ends in 2014.

“I’m planning on taking a year away from BIO, remaining an active member, and running in 2015 for a position on the board,” Morris said.

Awards to be bestowed during the conference include the Biblio Award, the BIO Award, and the Plutarch. In addition the conference will witness the first awarding of the Hazel Rowley Prize for Best Proposal for a First Biography.

In the meantime, past conference attendees should watch their mail for a survey that will help guide the Compleat Biographer 2014 Program Committee members in planning this year’s conference. The committee members are: