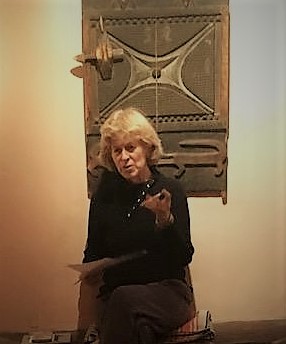 Alison Owings knew she wanted to write about homelessness, but she wasn’t sure how to approach the topic. Then, on a walking tour of San Francisco’s notorious Tenderloin neighborhood, she met Del Seymour, an elderly African American man leading a group of curious whites through the streets he knew so well. After all, he had earned the unofficial title of “the mayor of the Tenderloin.”

As he recounted some of his experiences as a homeless man in the neighborhood, Seymour said, “I could have gotten a Ph.D. in sidewalks”—and Owings knew she had the focus for her book. She would make Seymour a “micro example of the macro American scourge of homelessness.”

Owings talked about her subject and the biography-in-progress of his life at a reading marking the end of her residency in Tesuque, New Mexico, where she had spent several weeks working on the book as the ninth winner of the Mayborn/BIO Fellowship in Biography. Her host and mentor for her time in New Mexico was BIO co-founder James McGrath Morris, who also hosted Owing’s reading in his home.

Owings had previously written four books, but her book on Seymour is her first biography. Its working title is The Book of Del: Scenes from a Life Before, During, and After Homelessness. Owing began interviewing Seymour, now 71, in late 2015, and she also talked to about 15 people who had crossed his path in the Tenderloin—including his former crack dealer.

Seymour, a Vietnam War veteran who served as a medic and later became a successful contractor and engineer, found himself on the streets during his 18-year addiction to crack cocaine. During that time, he was a self-described hustler—acting as a go-between for other homeless people in myriad situations, legal and otherwise, and always for a fee. For a time, he was also a pimp.

Now clean and living in his own place, Seymour helps run Code Tenderloin, an organization he founded in 2015 to help provide education and ultimately jobs for people in his neighborhood. He also speaks frequently about homelessness to church and civic groups, and he shared his views on the “scourge” at the White House with the Obama administration.

While Seymour has been a cooperative subject, he is often fuzzy on dates and jumps around in his chronology. Owings has decided to present her material in impressionistic scenes. Right now, she envisions somewhere between 50 and 100 of these vignettes that show Seymour’s background, his descent into addiction and life on the street, and the positive path his life has taken since kicking crack.

Owings said the Mayborn/BIO Fellowship has given her what every writer craves: “uninterrupted time.” She has also received Morris’s help in structuring and condensing her writing. That included printing out her interview transcripts, which totaled two reams of paper. At the reading, Morris noted that Seymour’s domination of the research material and non-chronological presentation posed a particular challenge for Owings: “Organizing that so she can write a narrative is very hard.”

Another challenge Owings might face is finding a publisher, since she presently does not have any kind of collaboration agreement with Seymour, though she has promised him a share in any profits. Owings said, “Del has told me, oh, he’ll sign anything, don’t worry about it,” but as one audience member pointed out, he is a self-confessed hustler.

Still, Owings believes Seymour is motivated mostly by a desire for some kind of redemption: “He’s still trying to exonerate himself from what he did before . . . make good for what he did bad.” And while Seymour’s life dominates the story, Owings has kept a focus on the larger issue of homelessness and how people on the streets—or, increasingly, those working full-time jobs and living in their cars—struggle to survive.