Fair Use: Q&A with the Experts 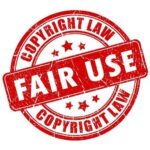 On June 9, Brandon Butler and Peter Jaszi took part in a virtual workshop for BIO on fair use for biographers. Here, Butler and Jaszi answer two follow-up questions on the topic. You can see a recording of the workshop here, and read BIO’s Statement on Best Practices regarding fair use here.

Q: Taking into account fair use doctrine, when do we—and when don’t we—have to pay licensing fees in order to use photographs and other illustrations still under copyright in our books? And how do we find out if a photograph or illustration is out of copyright and can be reprinted freely?
A: There are two key contexts in which you don’t have to pay fees to use third-party content (such as photographs or illustrative material). The first is when your use is a fair use. We covered the broad contours of the fair use doctrine, and how it applies to some recurring biographical uses, in some detail during our webinar. Another very useful source of guidance on the scope of fair use is the growing body of best practices documents developed by communities of creators and other frequent users of in-copyright works. If your use is a fair use, you don’t have to get permission or pay licensing fees. An excellent case in point, which we described during the webinar, is the Bill Graham Archives v. Dorling Kindersley case. Among other useful things, the Second Circuit’s opinion informs us that:

Preliminarily, we recognize, as the district court did, that Illustrated Trip is a biographical work documenting the 30–year history of the Grateful Dead. While there are no categories of presumptively fair use, courts have frequently afforded fair use protection to the use of copyrighted material in biographies, recognizing such works as forms of historic scholarship, criticism, and comment that require incorporation of original source material for optimum treatment of their subjects.

This important case also makes clear that fair uses don’t necessarily involve critique or commentary on the work that is being used. In that case, as in many others, the point of the reproduction was to illustrate the author’s narrative—which can be an entirely legitimate fair use purpose.

The other major context for unlicensed use is when the work you’re using is in the public domain, i.e., the work is no longer protected by copyright (or, in the case of some federal government works, it never was protected by copyright). The best quick reference for determining whether a work is in the public domain is the Cornell University Library’s handy chart. And sometimes, of course, text or images you want to use are available under a general Creative Commons license.

Experience in other fields suggests that once one publisher or editor takes advantage of their rights, others will follow eventually, lest they be left behind. As more join the fair use pack and industry norms catch up to legal reality, there will be safety in numbers and everyone will be better off for it. For this to happen, though, authors may have to take the first step, by insisting that the editors and publishers allow them to make responsible use of this important copyright doctrine.