Almost 200 established and aspiring biographers immersed themselves in their craft at the Sixth Annual Biographers International Organization Conference, held June 6 at the National Press Club in Washington, DC. Amidst the various panel sessions, attendees also saw Taylor Branch receive the 2015 BIO Award. Branch is best known for his trilogy about Martin Luther King Jr. and the civil rights movement, known collectively as America in the King Years. 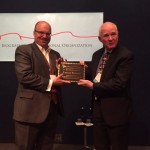 The Accidental Biographer
In his keynote address, Branch called himself an accidental and partial biographer, as he used the life of King and others to tell the story of the civil rights movement, which he called “the last great uprising of citizens’ idealism that really changed the direction of history.” Branch wanted to better understand the movement and address what he saw as problems with the existing books on it: They were “analytical and abstract” with an emphasis on interpretation. Branch wanted to “feel its power, which for me was personal and quite deep.”

But before and while immersing himself in what would become a 24-year endeavor to better understand and then write about the movement and its makers, Branch worked as journalist, ghost wrote the memoirs of Watergate figure John Dean and basketball star Bill Russell, and spent hours recording the thoughts of an old friend who just happened to become US president: Bill Clinton. Branch recounted some of the recording sessions that would form the basis of Branch’s The Clinton Tapes: Wrestling History with the President. Clinton wanted to document the history of his presidency as it unfolded, and his sessions with Branch remained secret through the president’s two terms. For Branch, the sessions gave him the chance “to get the fullest record that historians will one day have” of what daily life was like for Clinton in the White House.

Clinton and Branch had worked together in Texas during George McGovern’s 1972 presidential campaign, and they often discussed political idealism. Branch thought he “had a better chance to influence [US politics] toward integrity as a writer than in politics.” With his King books, he explored the citizens’ idealism he saw in the civil rights movement, the reaction to it, and its lasting effects. He said, “The civil rights movement set things in motion that are still benefiting our country today, including same-sex marriage…. The civil rights movement forced people to break down their emotional barriers against dealing with what equal citizenship really means in everyday life.”

Branch chose to depict the movement in as personal a way as possible, to fight the urge in the United States to “reinterpret history wherever race relations are involved.” As an example, he cited the textbooks he read growing up in Atlanta, which taught that the Civil War had nothing to do with slavery. Many history books, Branch believes, deal with what a culture is comfortable talking about. Telling the personal stories of the people of the civil rights movement in a narrative history, Branch hoped, would preserve some of the uncomfortable facets of race relations in the United States, thus providing a more accurate history. 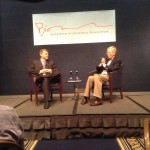 Thomas and Brinkley in Conversation
The conference events kicked off in the morning with a plenary breakfast session called “The Art and Craft of Biography: Evan Thomas and Douglas Brinkley in Conversation.” Between them, the two have authored biographies on a wide range of figures who helped shaped the twentieth century, from presidents to Walter Cronkite. They engaged in an easy dialogue as they explored some of the challenges they’ve faced during their careers.

For Brinkley, one challenge came when writing about Rosa Parks. When she made her historic refusal to leave her bus seat, about a dozen or so people rode with her. But when Brinkley did his research, he interviewed 55 people who claimed to be on the bus that day. “Everybody in Montgomery was on Rosa Parks’s bus,” he joked. “I had no idea who to trust.” Brinkley also had personal access to his subject and saw firsthand her willingness to help others, something that made writing the Parks book “probably the most moving personal biography” he’s done.

Following that observation, Evan Thomas said he had just finished a biography of Richard Nixon, and the president “was not a Rosa Parks.” But Thomas did come to appreciate how hard it was to be Richard Nixon, who was socially awkward and “a powerfully lonely guy.” Nixon’s experiences intersected with the life of another of Brinkley’s subjects, Walter Cronkite. CBS News played a big part in bringing Watergate to the public’s attention, and Nixon wanted to “get” Cronkite, who personally liked Nixon. Cronkite also interacted with another of Thomas’s subjects, Robert F. Kennedy. The newsman, Brinkley said, crossed the line of journalistic ethics when he urged Kennedy to run for president in 1968 because of the morass in Vietnam.

Another topic Brinkley and Thomas covered was how to get the biography subject’s family on board, which can be hard when relatives, especially children, want to preserve their loved one’s image, and their truthfulness might be suspect. Thomas also mentioned the difficulty at times of sorting out key details from extraneous facts—“I wish I had a magic formula to help you figure out what’s important and what isn’t.” Another concern for biographers today: plagiarism, or the accusation of it. One strategy, Thomas said, is to footnote extensively and acknowledge the work of experts in the foreword. Brinkley cited a slightly different problem, of anecdotes that get passed along as truth but without sources to back them up. He relies on double sources when possible to verify information.

After discussing some of the nuts and bolts of the craft, Brinkley ended the session on a loftier and inspiring note. He called biography “the most indispensable art form because in America, we live by individuals… that’s how we process history, through people.” 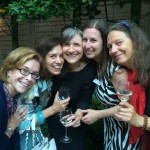 Preconference Events
While Saturday, June 6, saw most of the conference’s events and festivities, on Friday some attendees explored the Library of Congress on private tours. In the evening, BIO members gathered at the Georgetown home of board member Kitty Kelley, where Thomas Mann, formerly of the Library of Congress, received BIO’s Biblio Award. Established in 2012, the award recognizes a librarian or archivist who has made an exceptional contribution to the craft of biography. Mann retired from the Library in January 2015 after 33 years of service.

Also at the reception, board member Will Swift announced that Jonathan Segal will receive BIO’s Editorial Excellence Award this November. Pulitzer Prize-winning investigative reporter Carl Bernstein will present the award and the evening’s events will also include a panel discussion. Look for more details on this event in upcoming issues of TBC.