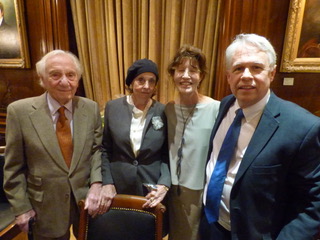 Nan A. Talese is flanked by A. E. Hotchner to her right and Anne C. Heller and BIO President Will Swift to her left.

We learn by stories,” Nan A. Talese said, and when it comes to biography, “the story of the person’s life should be interesting and carry the reader along.” That was just one of the insights Talese imparted from a 50-year career in publishing, many of those years spent helping dozens of biographers bring their subjects’ stories to life.

The October 5 event at the New York Society Library began with an introduction by BIO member Anne C. Heller (who played the key role in organizing the evening and ensuring its success, in collaboration with members Kate Buford, Deirdre David, Gayle Feldman, and Will Swift). Talese worked with Heller on her biography Ayn Rand and the World She Made, and Heller noted that Talese’s books “are known both for their literary excellence and for their physical beauty.” She praised Talese for “the extraordinary judgment, taste, skill, dedication, and, in my case, patience, Nan has brought to her literary calling.”

A. E. Hotchner followed Heller and recounted working with Talese on Papa Hemingway, Hotchner’s account of the novelist’s life and Talese’s first major biography after coming to Random House from Vogue as a young editor. Hotchner described going into her tiny basement office—a broom closet that included a desk and two chairs—and her first words: “I think we should change the title.” She also advised him to put more of himself in the book, as Hotchner and Hemingway had been friends. As Talese later explained, she suggested edits while also drawing more out of Hotchner, and they ended up cutting 20 percent of the original manuscript and adding a new 20 percent. Papa Hemingway went on to become a perennial best seller.

Hotchner and Talese worked together on several other books, and Hotchner noted her eye for detail, sometimes questioning a single word choice, and her swift and careful attention to the manuscripts she receives. Most gratifying, he said, was hearing Talese describe a manuscript as “wonderful.” He said, “She says wonderful better than anybody else.”

Talese spoke next, offering her recollections of some of her experiences with Hotchner. At their first meeting, which included several other editors, she admitted, “He thought that I was going to bring them coffee or something; he certainly didn’t think that I was going to be his editor.”

Talese also discussed some of the other noteworthy books she has worked on, including Thomas Keneally’s Schindler’s List and the challenges she faced negotiating the finances of the book with Keneally’s lawyer. Talese wanted the book badly, and she said she became a “pest” as she worked to close the deal. Talese also recalled the difficulties she and Deirdre Bair had in securing rights to Saul Steinberg’s art for Bair’s biography of the cartoonist.

Talese and Bair worked together again on Bair’s new biography, Al Capone: His Life, Legacy, and Legend, published last month, and Bair joined Talese to address what Bair called the “nuts and bolts” of editing and publishing biographies. Asked what she looks for in a book she publishes, Talese said she focuses on three questions: Does the writer use language well, is the writer a storyteller, and does the writer tell the subject’s story with such passion that people will want to read it.

When Bair brought up the popularity of celebrity biographies and wondered if there is still a place for deeply researched books on serious subjects, Talese said people do still want those “big” biographies. At times, though, such books are reviewed so well, “people think they’ve already read the book” after reading the reviews.

Reflecting on her career, Talese said she was not truly qualified to be an editor when she first came to Random House, and her first job was looking for typos. But she was grateful to be there, saying, “I couldn’t believe I was being paid to read….To this day I love it just as much.” With her job, “you live in another world, you learn of another world.”

Following the Q&A, BIO president Will Swift presented Talese with her award, noting the importance to biographers of skilled—and passionate—editors like herself, as they “help us become more than we dreamed we could be.”