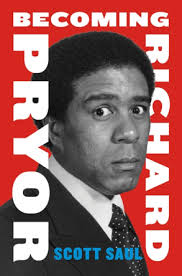 Scott Saul’s Becoming Richard Pryor appeared as the biography of another iconic African American comedian was stirring controversy, as TBC explores below. Saul’s book has been praised for its thorough examination of Pryor’s life, with Kirkus Reviews calling it “the place to start” for anyone curious about the comedian’s life.

Saul is a professor of English at Berkeley. His first book, Freedom Is, Freedom Ain’t: Jazz and the Making of the Sixties, came out in 2003 and won an American Book Award from the Before Columbus Foundation. TBC contacted Saul before his new book’s release; we were especially curious about the companion website he created for the book and how other biographers might learn from his experience with it.

What drew you to Pryor?
I can’t think of a deeper subject. How deep you are—that’s how deep Pryor will go with you.

When I was ten and growing up in the San Fernando Valley, I saw Silver Streak and identified with the Gene Wilder character, who needs Richard Pryor to jolt him out of his nebbishhood; I sensed that Pryor was taking me to another universe of knowledge and experience, giving me a new world view. Then, as a teenager, I listened to his comedy and was captivated by how he handled, without kid gloves, sensitive subjects like sex and race. In my twenties, I returned to his stand-up comedy and his Hollywood films from the 1970s—and was struck by his virtuosity as a performer and actor, the mix of subtlety and audacity. This was a comedian who had better chops than anyone, but who also was incredibly experimental—not unlike the jazz musicians who were at the center of my first book.

Then, in my thirties I was living and teaching in Berkeley, and noticed that Pryor’s “Berkeley interlude” was a big hole in the story his previous biographers had told. So, as a sort of pilot project for a larger biography, I decided to research the time he’d spent in Berkeley. And what I found blew my mind: There was a much more complex and fascinating story buried within the conventional wisdom about his life.

Did you face any special challenges dealing with his family?
Pryor led a fascinating but messy life, and he didn’t tie up all the loose ends when he died. His will made his last wife Jennifer the executor of his estate—a fact that rankled several of his children, who felt that they’d lost ownership of their father’s legacy. They took legal action against Jennifer, arguing that as his caretaker she had unfairly manipulated a dying man into marriage. Jennifer prevailed in court.

What this meant for me as a biographer looking to tell Pryor’s full story is that I needed to talk to people who basically refuse to talk with one another. Fortunately, I found that my approach to Pryor—which is more historical than journalistic—was well-received. Jennifer is, among other things, a descendant of the fiery abolitionist John Brown, and she liked the fact that I was bringing a historical depth to her husband’s story. Likewise his daughter Elizabeth is actually a professor of history at Smith College. She appreciated how I was delving through archives and setting her family’s story in the context of WWII, black life in the 1950s and so on.

What was it like writing about a person who touched on so many taboo topics and led such a sensational life?
I think every biographer has to struggle with questions of voice and tone. There were some earlier writers on Pryor who had adopted a sort of hopped-up tone that, I think, was their attempt to approximate the energy of Pryor’s stand-up. “Check out this wild and crazy guy!” they seemed to shout. I thought that such an approach wouldn’t work over the span of a 600-page book: readers would feel like I was getting in the way of the story. So I tried to make my tone as narrator more measured. I let Pryor, and the people around him, speak for themselves—and what they say, in their own words, stands out more clearly against the backdrop of the steadier tone of the narrator. I’m reminded of the advice I heard from a historian I admire: “You write not to shout, but to get your reader to shout.”

You’ve built a big digital companion to the book that curates over 200 documents related to Pryor’s formative years in Peoria, Illinois. What inspired you to create the website and what do you hope to accomplish with it? What led you to include primary sources?
There was no historical monograph on the history of Peoria, so I had to do a lot of spade work myself to reconstruct what it was like for a black boy, born in 1940, to grow up in the red light district of Peoria. It was research that was sometimes oriented around the story of his family (which ran a set of brothels and a tavern in that district) but also stretched out to encompass a larger set of issues, like the history of segregation and urban reform in the city.

After I had written the five chapters that trace Pryor from his birth to the moment, in his early twenties, when he leaves Peoria for New York City, I felt like I had, in effect, done the research for another book, too: a study of a so-called “typical” mid-sized, middle-American city (and here Peoria’s use in shorthand to stand for middle America was just too perfect) as it evolved from the 1930s to the 1960s, jolted by World War II, “cleaned up” during the 1950s, and shaken by the gathering Civil Rights movement in the 1960s.

I didn’t want to write another book, but I did want to share my research—and get people to engage with the complexity of Richard Pryor’s story, and of the story of his hometown. To my mind, there’s no better way to get people to engage with complexity than to have them parse primary documents. For example: a reader might begin just by being curious about Richard Pryor’s school records. But if they look at the school records more closely, they’ll start to delve into how conventional schools, in the 1950s, handled children with unconventional talents. And they might then connect Pryor’s experience with the experience of other black kids in Peoria schools—kids who, in the 1960s, started protesting the limits of their educational environment.

With all the detail at the site, do you worry some people might go through it and feel they don’t have to buy the book? How do you establish that balance of too little/too much info? Or because the site focuses on Peoria years that is not a concern?
I’m not worried that the site “gives away the store” because it’s only a companion to the first section of the biography—which has five sections. And I think that many fans of Pryor come to the book most disposed to be interested in the other sections of the book—i.e., the story of how he became a revolutionary figure in stand-up comedy, or how he came to Hollywood and upended it.

In terms of sales, the website is a bit of an experiment, but my hunch (on the eve of my book’s publication) is that the website will give the book a longer life than it would otherwise have and will lead many more people to buy the book. Five years from now, HarperCollins will have long stopped promoting the book, but teachers in fields like US history, African American history, and urban studies might still have considerable use for it. It’s helping to keep Pryor alive in the culture.

Is the site basically done, or do you imagine that it’ll evolve over time?
Because of way the site is organized, it would be easy to upload more images and documents to it, so I imagine that it will expand in the future. If, say, one of Pryor’s relatives were to offer to share more of her family photos, I would be very happy to put them up, annotate them, and organize them on the site. Or if, say, the Peoria Public Library wanted to send me some material from their Jaycees collection (the Jaycees were a big part of the coalition fighting the city’s red light district), then I would love to curate that material on the site, too. All that said, I think that the archive is pretty extensive as it is!

The technical side: did you create the website and handle the tech issues? Did you pay for it yourself?
Creating a customized website like this one is pretty darn complicated and labor-intensive—and is necessarily collaborative because it involves so many skill sets: web design, web development and coding, the art of historical annotation and essay writing, cartography, even filmmaking (we made a four-minute film that’s mounted on the homepage and available on Youtube). I served as the “editor-publisher” and was finicky about the writing and design of the site, but the credit for the site rests with the enormously talented team that gave their all to build it.

All told, the website cost about $20,000, though that doesn’t include the time I invested in it. I started by putting up several thousand dollars from a research fund to pay a former student of mine to design a template. (Remarkably, it was the first site he ever designed; he’s insanely talented.) Then Stanford University’s Spatial History Project funded a summer of site-building and development. Then I engaged two Berkeley history PhDs, with considerable coding expertise, to bring the site to the next level.

Though $20K is a considerable amount of money, it compares very well to other, similar projects (i.e., our process of building the site was cheaper than most). And I think that now that “Richard Pryor’s Peoria” offers a model for this sort of site, other historians and biographers will have a much easier time generating a template—and perhaps getting outside funding—to do similar digital companions. I’m sure your readers would have a lot of great ideas. Mark Twain’s Hannibal, Emily Dickinson’s Amherst, Ben Franklin’s Philadelphia, Langston Hughes’s Harlem: there’s really no end to what could be done in this line.

Anything interesting you’d like to add about the research/writing process that other biographers might find useful or entertaining?
Writing a biography is a marathon, I think. I sometimes tired of writing my book, but I never tired of Richard Pryor as a subject. He remains electrifying—the ultimate uninsulated wire.