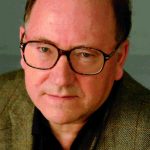 British author Richard Holmes, beloved for his biographies and memoirs about writing biography, is the winner of the ninth annual BIO Award. BIO bestows this honor on a colleague who has made a major contribution to the advancement of the art and craft of biography. Previous award winners are Jean Strouse, Robert Caro, Arnold Rampersad, Ron Chernow, Stacy Schiff, Taylor Branch, Claire Tomalin, and Candice Millard. Holmes will receive the honor on May 19, at the 2018 BIO Conference at the Leon Levy Center, City University of New York, where he will deliver the keynote address.

Holmes’s The Age of Wonder was shortlisted for the Samuel Johnson Prize, and won the Royal Society Prize for Science Books and the National Book Critics Circle Award for Nonfiction. He has written many other books, including Falling Upwards, an uplifting account of the pioneering generation of balloon aeronauts, and the classicFootsteps. Its companion volumes, Sidetracks and This Long Pursuit, complete a trilogy that explores the Romantic movement biographer at work. Holmes’s first biography, Shelley: The Pursuit, won the Somerset Maugham Prize; Coleridge: Early Visions won the 1989 Whitbread Book of the Year Award; Coleridge: Darker Reflections won the Duff Cooper and Heinemann Awards; and Dr. Johnson & Mr. Savage won the James Tait Black Prize.

Holmes holds honorary doctorates from the universities of East Anglia, East London, and Kingston, and was professor of biographical studies at the University of East Anglia from 2001 to 2007. He is an Honorary Fellow of Churchill College, Cambridge, a Fellow of the British Academy, and was awarded the OBE (Order of the British Empire) in 1992. He lives in London and Norfolk, with the novelist Rose Tremain. TBC will have an interview with Holmes in an upcoming issue.