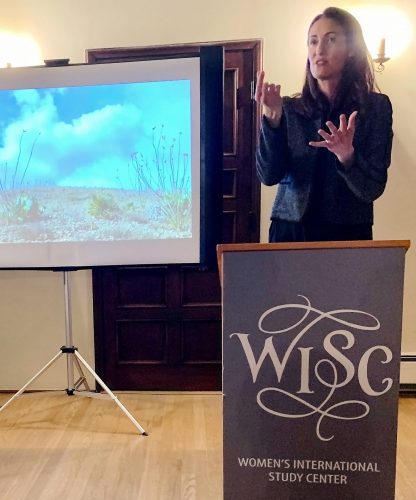 Working on a dual biography of a relative who crossed paths with the Chiricahua Apache chief Geronimo, Morgan Voeltz has faced several challenges. She has also come to a conclusion that is probably familiar to many biographers: “Neither of these characters is entirely a hero,” she said, “and neither is entirely a villain.”

Voeltz spoke about her experience working on the biography (her first), at a talk on February 20, at the Women’s International Study Center (WISC) in Santa Fe. The event culminated her two-week stay in New Mexico as the Mayborn/BIO Biography Fellow. The fellowship was initiated by BIO co-founder James McGrath Morris nine years go. (The fellowship is being restructured for next year; you can read about that here.)

While all the Mayborn/BIO fellows have benefited from the chance to put aside daily demands and devote time to researching and writing (and to receive mentoring from Morris), Voeltz found her New Mexico stay especially helpful. During her residency at WISC, she met with some of the Southwest historians whose works she had already read, contacted Apache sources, explored the region’s topography, and saw artifacts from Geronimo’s time. Meeting with a representative of the Mescalero Apache tribe, Voeltz could ask a key question: “What should I know, what should I understand, if I want to write about this culture that is not my own?”

Finding a Focus
The impetus for exploring the intersection of the lives of Geronimo and Voeltz’s great-grandfather, Captain Henry Lawton, came from Voeltz’s grandmother. She suggested that Lawton’s life was worth researching and writing about. A native of Indiana, Lawton joined the army at 18 and fought in the Civil War, the Indian Wars of the West, and the Philippine-American War of 1898. He died in combat during that latter conflict. Voeltz began examining her relative’s life while working on an M.A. in nonfiction writing at Johns Hopkins University. She was struck by how “his life crossed paths with some really formative events for U.S. history during that entire era of the late 1800s.”

Her literary agent convinced Voeltz that instead of giving Lawton’s life a cradle-to-grave treatment, she should focus on one part of his life: the manhunt Lawton led to track down and arrest Geronimo and his Apache followers. But for Voeltz, the story is more than an adventure tale that follows the two men across the Southwest and into Mexico. She also wants to explore the two cultures at play. “Lawton and Geronimo come into the situation with completely different realities,” Voeltz said. “And I want readers to feel that.”

Part of Geronimo’s reality was growing up in the Gila Mountains of southwest New Mexico. That’s where he learned the survival skills that would help him elude capture for some four months in 1886, as Lawton and his men pursued the Apaches over mountainous desert terrain. For Lawton, a motivation in his life was uniting and then protecting the Union he loved.

Shared Traits
During her research, Voeltz learned that her great-grandfather and Geronimo had, as she put it, “a number of commonalities at a very deep human level.” Both chose the warrior life and saw violent conflict at an early age—Lawton during the Civil War and Geronimo while taking part on raids. Both became respected leaders because of their military skill (while Geronimo’s status was bolstered by his role as a medicine man). Lawton and the Apache chief also had strong family and community ties.

Finally, Voeltz said, both men “experienced profound loss in their lives, the kind of loss that knocks you loose from your foundation.” Each lost a parent before the age of 10, and each lost their first three children. Despite those losses, Lawton and Geronimo also had great physical and psychological resilience. Voeltz said the chase through the mountains—the backbone of her story—“puts both of their physical resilience to the test, as well as their emotional resilience.”

Challenges and Conundrums
Finding the sources to give each subject’s perspectives and experience equal weight has presented Voeltz with some challenges. It’s much easier for Lawton’s side, as his letters to his wife are in the Library of Congress. They give Voeltz insight into his character as well as details about life on the trail. But for Geronimo’s side of the tale, there are no written sources from his time when he was trying to evade Lawton. Voeltz is trying to piece together things by knowing how the Apaches lived and traveled in the region at that time. In one example, she noted how Geronimo had been given tips when he was a boy on how to survive in a hostile environment—tips that likely came into play in 1886.

For the Apache side, Voeltz has also turned to accounts left by Apache scouts who traveled with Lawton and his men, though they were recorded years later, as told to white men. Geronimo, likewise, dictated an autobiography later in life to a white notetaker. Voeltz also relies on Apache oral histories, including some from men who lived with Geronimo after his capture.

Voeltz is also considering the language she uses. Geronimo has often been described as a renegade, but is that the proper word, she wonders: “Can you really be a renegade if you’re traveling through a region that you perceive to be your own land?” And Voeltz has tried to find the proper description for Geronimo and his men, and has ended up using Apaches, Indians, and Native Americans interchangeably.

Perhaps her biggest conundrum, Voeltz said, is how to grapple with issues of privacy and taboo. She said, “To the Apache, one does not speak someone’s name after that person has died. My book is full of the names of people who died. How do I navigate this?” Along with that, she is wrestling with how to do justice to Geronimo’s world view, one that included his belief that he could communicate with the elements and stop time.

Voeltz will continue to sort out these and other concerns as she works on her book. In the meantime, her fellowship in New Mexico has prepared her for the next phase of research and writing, even as she juggles a full-time job and raising a family. After the fellowship, she said, “the pump is primed.”