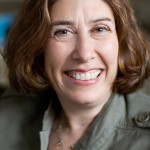 Not a lifelong Rockwell fan, Solomon said she was “blown away” by a 2001 retrospective of his work at the Guggenheim.

Art critic Deborah Solomon has won plaudits from readers and critics alike for her recently published American Mirror: The Life and Art of Norman Rockwell, the first complete look at the iconic artist.

The first is one faced primarily by biographers writing about artists, as well as musicians, composers, singers, and others whose work cannot easily be explained in words. Try as hard as one might want, a verbal description of a painting is usually inadequate. “In fact, it is possible to read a factual description of a painting and have almost no idea of what it looks like,” Solomon said.

“At the same time,” she added, “I think a biography of an artist cannot skimp on discussions of the work. There is no point, to my mind, in writing about artists if their art does not acquire a new clarity and visibility in the process.”

As a result Solomon pushed to include reproductions to accompany the text whenever she devoted more than one or two sentences to a painting. “And I pleaded with my editors and book designers to take the time (and expense) to insert the reproduction on the page on which the discussion of the painting occurs,” she said. “I am not a fan of the 8-page glossy color inserts you often find in biographies. They ghettoize the images in a place miles away from the text, and I am not sure that readers are eager to traipse between them.”

This solution is far more important than a matter of mere convenience for readers. By placing the art in close proximity to the text, the reader can see the aspects of the painting that are described in the text. “You can dismantle the painting with your eyes, and then reassemble it” she said. “You can consider how the parts relate to the whole, which is basically the only way to understand what a particular painting is about.”

Despite having written two previous biographies on artists (Jackson Pollock and Joseph Cornell), Solomon conceded the somewhat Sisyphean aspect of the task. “Every art biographer is faced with a slightly hopeless situation. You feel the necessity of describing artwork—as well as the futility of it.” 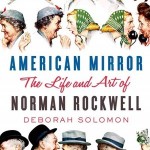 In writing about Rockwell a second challenge surfaced that is more common to the experience of many, if not all, biographers writing about a figure of the past—the topic of sex. “I consider myself an art expert, but not a sex expert. So when I write about an artist, I do not try to come to any conclusions about sex. I merely try to present the evidence about a subject’s sexual habits and let readers draw their own conclusions.

“Many readers concluded that Rockwell was a repressed homosexual,” Solomon said. But the conclusion would be theirs, as she never overtly said so. “I would never presume to speculate about an artist’s sexuality because I believe sexuality is unknowable; too much remains hidden.”

Rather Solomon chose to speculate about the meaning of Rockwell’s art “because,” as she explained, “I believe that a work of art puts everything out there for us to see, and never lies.”

In Rockwell’s work, Solomon found and pointed out to readers that in many of his paintings he paired two male figures, one larger than the other. “This is a pattern throughout his career—he painted images in which physically smaller men connect emotionally with stronger men. I called the paintings homoerotic because they feature two figures of the same sex bonding in a realm removed from women.

“This by no means makes Rockwell homosexual, although certain people insist on reducing my book to that sort of equation,” she said. Those would be people who failed to read Solomon’s introduction to the book in which she said that Rockwell “was given to affections that do not fit any known label.”

“True artists,” Solomon told TBC, “are likely to be as conflicted in their sexuality as they are in everything else.”For Morris’s review of Solomon’s work, go here.