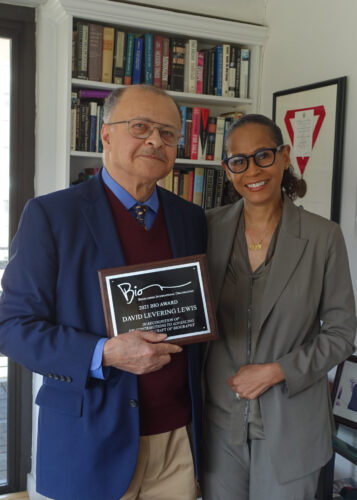 After receiving the 2021 BIO Award from Pamela Newkirk, David Levering Lewis spoke on “Black Biography Matters: A Prophet and A President.” The prophet was W. E. B. Du Bois, the subject of Levering’s two-volume, Pulitzer Prize-winning biography. The president was Barack Obama.

Lewis started his talk by giving a mini-bio of an unnamed figure: A biracial American who did not face the extreme discrimination other Blacks did, thanks in part to having one white parent and living in a relatively tolerant state. This figure, though, came to embrace his Black roots as well as the culture and aspirations of Black Americans.

Lewis said that if his audience assumed he was talking about the first Black president of the United States, they were correct. But Lewis pointed out that many of the details of Obama’s life as a biracial American applied to Du Bois as well, another man who embraced his Blackness and achieved greatness. The two, Lewis said, shared “strikingly similar biographical profiles,” and his introduction featured the “interweaving of like-minded quotations” from Obama’s and Du Bois’s autobiographical writings.

Lewis’s goal with this introduction was to illustrate “the significance of a largely unsuspected parallelism in the racial coming of age of two of the most influential American men of the last 100 years.” But as Lewis went on to show, Obama’s career as president ultimately diverged from the path Du Bois took as a scholar and activist, though he also noted that there would have been “no Obama presidency without the Du Bois civil rights legacy.”

After adding a few more details to each man’s biography (noting that in Du Bois’s hometown of Great Barrington, Massachusetts, “black families were rarer than Democrats”), Lewis turned to Obama’s idea of the “audacity of hope,” the title of the book Obama wrote before announcing his candidacy for the 2008 Democratic presidential nomination. Lewis called that expression an example of political optimism—an optimism reflected in candidate Obama’s belief that racism was an old problem that the country had transcended. Lewis said he “had seemed to resolve those dilemmas of nationality and color unforgettably proposed by Du Bois in his foundational text The Souls of Black Folk.” And Americans seemed eager to embrace the idea of a “post-racial” future.

But then, in not so few words, Lewis said, “Not so fast.” He explained Du Bois would not have accepted that the country had transcended race. “Rather, he could remind us that he predicted that race still would remain the predicate of our American experience long after the formal dismantling of segregation.”

Lewis recounted how, as a presidential candidate, Obama tried to generate universal appeal by not being threatening to white voters, while winking reassuredly at Black ones. And he might have been “just progressive enough to intrigue old troublemaker Du Bois.” But Obama didn’t live up to the promise of the “audacity of hope” and become a transformational president. And Black scholars who pointed out that John McCain won the white vote in 2008 by 10 points over Obama had their op-eds dismissed as being out of sync with the supposed post-racial era the country had entered.

Lewis said that Obama didn’t seize the opportunity the Great Recession presented when he took office in 2009. Obama was economically timid and pursued a “futile strategy” of conciliation with his Republican critics. Though there were critics on the left, too, who berated Obama’s timidity. Still, Lewis said Obama had notable first-term successes, such as saving the auto industry and signing legislation that created the first federal consumer protection bureau. And Lewis called passage of the Affordable Care Act the signature accomplishment of Obama’s presidency (while noting it was a bonanza for the insurance industry).

Turning back to Du Bois, Lewis said he should avoid speculating on what his subject might have made of the Obama presidency. But he said he would any way, given that Du Bois had “spoken rather presciently to our times” in the 1950s about what he saw as a lingering American problem: too many people were willing to live in comfort “even if the price of this is poverty, ignorance, and disease of the majority of their fellow men.” Du Bois, Lewis said, moved from seeing racism as the central American problem to a broader economic emphasis on class discrimination, while still recognizing that race was a “component of America’s DNA.” Obama, on the other hand, saw race “as of limited value in formulating an economics of redress.”

In the end, Lewis suggested, Obama and DuBois stood at opposite poles. “For Du Bois, racism defined the American social contract.” For Obama, “the less said about race relations, the better.”  Lewis admitted that the Obama presidency ended “with much to its credit.” But the idea of a post-racial reset for the nation “had already been fatally belied by worsening disparities now become irrevocably color coded,” by a Supreme Court decision that hamstrung the voting rights of Black and Latinx voters, and by criminal justice misdeeds and police violence that fueled protests and the Black Lives Matter movement. Many of these problems were only exacerbated during the Trump presidency.

Lewis closed with words from Du Bois, which he believes are relevant for the 2022 elections. Du Bois wrote that the majority of voters had to challenge a political system run by a minority based on their wealth and power. Du Bois said some might call his ideas for change “socialism, communism, reformed capitalism or holy rolling. Call it anything—but get it done.”