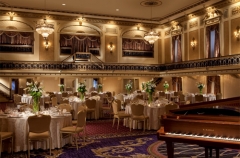 The Roosevelt Hotel, in midtown Manhattan, is slated to be the home of the fourth annual BIO conference.

The 2013 Compleat Biographer conference, scheduled for May 17 through May 19 in New York City, will include 20 panels, three or four on-site research workshops, and four master classes, according to program committee chair Brian Jay Jones.
“The program committee has put together an outstanding lineup of subjects for the conference,” said BIO vice president Jones. “There will be not-to-missed panels for all biographers, seasoned professionals as well as those just starting.”

The preliminary list of panels includes such topics as Getting (Too) Close to Your Subject, the Politics of Blurbs and Reviews, Beginnings and Endings, Biography for Your Audiences, the Art of the Partial Biography, University Presses, Lesser-Known Relatives, Writing the African-American Biography, and Biography on Film. The latter panel will include a screening of a biographical film about Father Michael Lapsley by Melvin McCray, a longtime editor at ABC News.

As with each conference, the keynote address will be given by that year’s BIO Award winner. The 2013 winner will be announced in the January 2013 issue of TBC. Past winners have been Jean Strouse, Robert Caro, and Arnold Rampersad.

The Friday of the conference weekend will feature research workshops at leading libraries and archives in New York City. Four master classes will be held Sunday morning; the topics are Writing a Proposal, the Art of the Interview, the Beginning Biographer, and the Art of Self-Publishing.
Places in all panels, workshops, and classes will be limited, and BIO members are encouraged to register early. “Not only do we expect a record attendance,” said James McGrath Morris, BIO president, “but we should have an outstanding lineup of editors, agents, and publicists at the conference by virtue of being in New York City.”
At press time final arrangements were being made with the Roosevelt Hotel to host the conference. The site committee will aggressively seek out inexpensive housing options and will also create a program of room sharing.
BIO members should watch their email later this month for the complete conference lineup and instructions for registration.