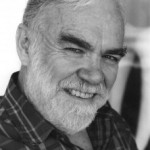 When J. Michael Lennon was pondering where and how to begin his recently published biography, Norman Mailer: A Double Life, he found his solution while taking a morning walk with his wife Donna Pedro Lennon. “We walk two miles every morning,” he said, “and answers, ideas, new perceptions came unbidden about halfway through our little stroll.”

The plan that came to him that morning was to create an opening scene in which the reader finds young Mailer in France in the late 1940s. Reading through his mail at an American Express office in Nice, Mailer saw that The Naked and the Dead was first on the best-seller list, and he knew his old life was gone.
This fall, Lennon’s book arrived in bookstores with praise from critics such as the New York Times, which said, “There’s not a paragraph in this enormous book that doesn’t contain a nugget of something you should have known or wish you had known.”
The book’s completeness is a reflection of its decades of gestation. Lennon first met Mailer in 1972, when he was writing his doctoral thesis on Mailer’s work, and in later years he became a friend as well as the author’s literary executor. Despite this close association, the biography tells Mailer’s whole story.
“That was his way, bare the soul,” Lennon said. Mailer “decided at an early age not to hide his warts, mistakes, or selfish acts from himself, and he didn’t…. He knew that a biography that glossed over his sins and follies would hurt his legacy far more than their revelation. ‘Put everything in,’ he told me.”
Lennon took over the project when the original authorized biographer and his friend, Robert Lucid, died unexpectedly in 2006. But Lennon went his own way, beginning fresh with his own style and sensibilities. And, despite teaching Mailer’s work through decades of college courses, he uncovered revealing new information as he wrote the book.  Lennon had not known, for example, how miserable Mailer was in the early 1950s after his second and third novels, Barbary Shore and The Deer Park, received terrible and mediocre reviews, according to Lennon. “He thought about becoming a lawyer, a carpenter or electrician, or working in prison administration. But his mood lightened around the time he co-founded The Village Voice.”
The biographer also didn’t realize the gravity of Mailer’s financial problems precipitated by the cash flow needed to support his large family. “I also did not grasp the extent of his amorous adventures, his philandering.” Lennon said. “He would be faithful for long periods, but until his later years always fell off the monogamy wagon.”
Because of his close friendship with Mailer, Lennon had to deal with his own presence in the narrative. “It was a problem,” he said. “I really enter the story around 1980, about the time John Lennon was killed and this caused confusion—two Lennons banging around in the same chapter.” Mike Lennon tried different tacks: leaving himself out, using the first person, and calling himself a “friend.” Ultimately, like Mailer in The Armies of the Night, he used his own name in the third person. “I don’t know if it was the right decision,” he says, “but I am liking it more and more.”
Lennon’s purchase of a condo near Mailer’s home in Provincetown on Cape Cod recalls other biographers’ quests for intimate understanding of their subjects. “I had Boswellian aspirations, and it was the only way to spend a lot of time with him,” Lennon said. Over three years he put together a 150,000 word “Mailer log,” a great resource for his book, based on three years of conversations and observations. “We got along pretty well and could see each other daily with no real strain,” Lennon said. “I tried to write down what he said at the dinner table, the poker table, and out on his back porch overlooking the Provincetown Harbor. My wife remembered a lot of his table talk, too.”

Donna Pedro Lennon has been with him every step of the way. She read and edited every chapter, he said, “and did an amazing amount of research. She transcribed all the interviews, and put together the photo section too… and she ran the house single-handedly for four years while I wrote. Without her help, and that of Barbara Wasserman, Mailer’s sister, there would be no biography.”

Barbara Burkhardt is the author of William Maxwell: A Literary Life and was an Associate Professor of English at the University of Illinois Springfield.  She serves as BIO secretary and is at work on a new biography.