All In: Biographers React to the Petraeus-Broadwell Affair 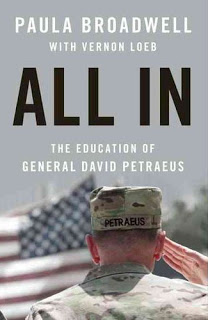 Sales of All In soared after news of the scandal broke.

Readers rarely come across articles on the craft or ethics of biography in the mainstream media. There are some exceptions, of course: the publication earlier this year of the fourth volume of Robert Caro’s Lyndon Johnson biography drew major coverage in such periodicals as Esquire and Newsweek, and Caro was interviewed on CBS’s Sunday Morning.
Last month, we saw another exception to this rule. When subject and writer have an affair and that affair leads to a public scandal for the subject—a revered popular figure—the ethics of biography soar to the media forefront.
Most TBC readers are by now well aware of the details of the Paula Broadwell–David Petraeus relationship. Their affair, which took place while Broadwell was writing a biography of the CIA head and highly regarded general, sparked a speedy comedown for one of the most influential and powerful public figures of the past decade. More important to BIO members, it publicly raised the professional and ethical dilemmas biographers can face. Those dilemmas go beyond the sexual; Broadwell may have broken the law with the way she handled classified information, though she is unlikely to face any charges.
With the revelation of the affair, some reviewers’ comments about Broadwell’s gushing treatment of her subject seem a little more pointed now. Even the title of the book, All In, raised eyebrows in this new light. And given the sensational nature of the relationship, author has now become subject, as news organizations try to understand Broadwell, what led her to the respected general, how she won his trust, and why she crossed a moral line that ruined his career. (Time will tell how the scandal affects hers.)
Adding some insight was Vernon Loeb, Broadwell’s coauthor and something of a forgotten figure in all this. It was Loeb who took Broadwell’s raw notes from the field and turned them into a book, though he wrote that Broadwell “liberally” revised his text. He also noted in the Washington Post that Broadwell and Petraeus had “an unusually close relationship”—but not one he equated with an extramarital affair.
Below are more of the media’s and BIO members’ reactions to this incident and its implications for biographers in general. Feel free to share your thoughts with us.

“In the end, biographers are much like spies. They seduce their subjects into telling their secrets, which they then use for their own purposes. When they are done, they cast their subject aside, ready to move onto the next. In that sense, the relationship between the Director of the CIA and his biographer was beautifully symmetrical.”
—Emma G. Keller, biographer of Winnie Mandela, in the Guardian

“Any biography of a living, breathing and active figure who’s still at the height of his powers is going to have to strike a delicate balance between access and objectivity. It can be very tricky.”
—Tim Duggan, executive editor at HarperCollins, in the New York Times

“There are not a lot of journalists who would want to get involved in an authorized biography. If you get too close to your subject, you are nothing more than a transcriber, and readers should know that.”
—Carol Felsenthal, biographer of Katharine Graham, among others, in the New York Times

“As with psychiatrists, same with biographers, you shouldn’t sleep with your subject.”
—Blake Bailey, biographer of John Cheever, among others, in the Huffington Post

“She participated in something with her subject that reflects on his character and brings his judgment into question and she didn’t disclose it. It doesn’t even matter much what it was that she did. The real issue is the lack of disclosure of important information like that to the reader.”
—James McGrath Morris, BIO president, in Salon

“You can’t expect to be friends or bosom buddies with the person you write about. If you are, you haven’t done your job. You work for only one person, your reader. You can’t have two masters.”
—David Nasaw, BIO member, in Salon

“For me all of the attention that David Petraeus’s affair with Paula Broadwell has brought to biography seems akin to the proverbial tempest-in-a-teapot. It does not make me rethink the biographer’s relationship to her or his subject. For one thing, how much of a real biographer is Broadwell, who had to pull in a journalist to help her? This does not sound like the working biographers I know. . . . I do not think that the Petraeus-Broadwell situation tells me much about biography. However, it says a great deal about Paula Broadwell and David Petraeus.”
—Gayle Feldman, BIO member, via email

“Broadwell decided to write All In after Harvard asked her to leave the PhD program. This, and other facts coming to light, suggests that rather than looking to become a respected biographer, her main goal was to market herself and salvage her career more broadly. The takeaway from this scandal for me as a biographer? Do not let any effort at promoting my book and myself outstrip the energy I devote to producing a quality work of biography in the first place.”
—Andrew Marble, BIO member, via email

“After the Petraeus/Broadwell mess I’m even more convinced that the authorized biography with all its pureed truths is a cheat to history.”
—Kitty Kelley, BIO member, via email

“Of course, I am following the Petraeus scandal with a keen appetite—after all, it’s a once-in-a-lifetime chance to see the words ‘biographer’ and ‘sexy’ in the same sentence—but the only thought that keeps running through my mind is a self-congratulatory I-told-you: ‘See, this is why I only write about dead people!’ Given that the subject of my first book was a chronic philanderer and my second is a brothel-keeper, my husband has been enthusiastically seconding that thought.”
—Debby Applegate, BIO member, via email