How did a liberal Massachusetts Democrat come to write a book on the Nixon marriage, and how in the world could he sell that book through social media? 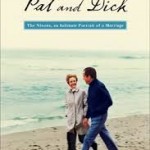 Swift’s book is the first scholarly look at the Nixons’ 53-year marriage.

As a psychotherapist who likes healing historical reputations, I wondered when I started my new book Pat and Dick: The Nixons, an Intimate Portrait of a Marriage if the Nixons’ partnership was as dreadful as commonly portrayed or whether its image was tarnished because scholars had not adequately studied the primary sources. I dug into newly opened Nixon archives, and the Nixon Foundation began to release love letters written during their courtship and when they were separated during the Second World War. As I slowly gained access to Nixon insiders, an entirely different Nixon marriage emerged: complicated, stressful, but grounded in love and commitment.

Now I had a compelling and surprising story. But how could I, as a liberal Democrat who had protested against the Vietnam War, reach a receptive audience?

Everyone reports the power of social media to sell books in these days of disappearing bookstores and dying book review pages. For me, going beyond a casual acquaintance with Facebook felt like having to take a computer apart and put it back together again without instructions. When faced with technical challenges like this, my mind goes blank. My friends Anne Heller and Kate Buford came to the rescue, telling me about their great experiences working with Ken Gillette of Target Marketing to promote their respective books on Ayn Rand and Jim Thorpe. I hired Gillette, and here’s a brief look at what he’s done for me.

I started a Facebook account for Pat and Dick on May 23, 2013, and by December 10 I had only accumulated 85 followers, despite my diligent twice-weekly postings. Twitter seemed even more daunting. I learned how to tweet my posts on Facebook by adding a #NIXON at the end of the post, but I only intermittently re-tweeted other people’s posts. I had managed to accumulate the underwhelming stable of 23 followers on Twitter by mid-December.

I was amazed that in the first week of target marketing, Gillette’s team doubled my numbers on both sites and quadrupled them by the launch date. I asked Gillette how they did it. “Considering your existing online audience was quite modest, we wanted to create a high-impact first impression,” he said. “Inspired by the book’s cover and content, we created a custom-designed look and feel across all of your social properties. The design was based on our design team’s research on what phrases and types of photographs people respond best to on social platforms. Then we installed and launched your newly skinned Facebook and Twitter pages.

“The published design carries over the design from the book cover and represents the branding in a sophisticated and interesting way. Our goal? When a new user first visits either site, not only do they know this is a site about Pat and Dick Nixon, but that it is part of a new book about them.”

Gillette said the next step for any social media marketing strategy is to execute a landscape review. What does this mean? “We needed to find where the book’s potential readership existed and identify all the social accounts where they reside,” he said. “My team did an extensive research on all social platforms (primarily Facebook and Twitter) related to the Nixons, Richard Nixon, presidential history, and biographies. This was time intensive, but we wanted to get a clear picture of where your potential customer base lies.

“In addition to social media, we identified the top 50 presidential history and biography blogs and websites. Not only did we target based on topic, we identified online sites with influential/sizeable audiences. Our research to date has a cumulative audience of over 500,000+.”

In early December, Target Marketing initiated a social promotion campaign on both Facebook and Twitter. It promoted the corresponding sites to the people who were fans of other pages and identified people in the social stratosphere by keywords and interests, according to Gillette. “By dramatically expanding your audience we were creating a potential customer base in prep for your book’s on-sale date. To date, we’ve had a 300% increase in the number of fans and followers across both platforms.”

From Awareness to Sales

Gillette explained that the next step is to push for sales once the book is officially available (January 7th): “We switch all branding to a picture of the book cover and a series of promotional ads that invite people to become more involved with your book, learn more, share news of its release and, of course, purchase it.”

My job during this time? Publish postings that emphasize my personal experiences in creating the book.

Next month, I’ll report on how well the social media efforts went.

Will Swift is a BIO board member. His previous book was The Kennedys Amidst the Gathering Storm, which covered the Kennedy family’s coming of age in London during the controversial ambassadorship of Joseph P. Kennedy.