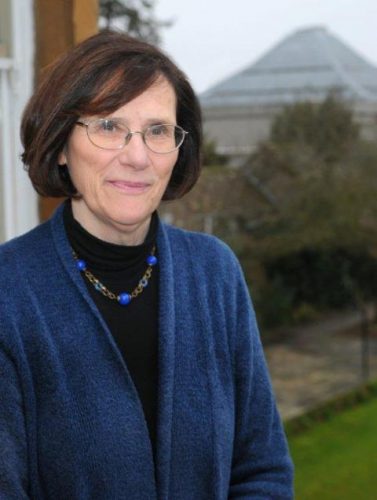 Dame Hermione Lee, Emeritus Professor of English Literature, University of Oxford, is the winner of the 11th annual BIO Award, a prize bestowed yearly by the Biographers International Organization to a distinguished colleague who has made a major contribution to the advancement of the art and craft of biography. Lee will receive the honor on May 16, at the 2020 BIO Conference at the Graduate Center of the City University of New York, where she will also deliver the conference’s keynote address.

One of the leading literary scholars and critics of our time, Lee is best known for her Virginia Woolf (1996), widely considered the definitive biography of that author. The book won the British Academy’s Rose Mary Crawshay Prize.

Comfortable with literature from both sides of the Atlantic, Lee has written biographies of two American novelists, Edith Wharton and Willa Cather, and also a critical study of Philip Roth. In addition, she has written a biography of the Anglo-Irish novelist Elizabeth Bowen and, most recently, of the British novelist, poet, essayist, and biographer Penelope Fitzgerald. Penelope Fitzgerald: A Life was the winner of the 2013 James Tait Black Prize and BIO’s 2015 Plutarch Award.

Lee has written extensively on the art and craft of what she calls “life-writing,” most notably in her books Virginia Woolf’s Nose: Essays on Biography (2005) and Biography: A Very Short Introduction (2009). She is a fine critical reviewer and judge of biographies, and her reviews have appeared regularly in The Guardian and The New York Review of Books, among many other publications. She was chair of the judges for the Man Booker Prize for fiction in 2006 and has judged many other literary prizes throughout her career. In her work as a scholar of literature, she has edited and introduced numerous editions and anthologies of works by major English and American writers, including Rudyard Kipling, Anthony Trollope, Virginia Woolf, Stevie Smith, Elizabeth Bowen, Willa Cather, Eudora Welty, and Penelope Fitzgerald.

Hermione Lee has worked hard to raise the academic perception of biography. As president of Wolfson College, Oxford, she founded the Oxford Centre for Life-Writing, in 2011. Nearly 10 years later, the Centre has become a busy hub of activities relating to many kinds of life-writing and interdisciplinary inquiry. Through its sponsorship of talks, lectures, performances, panel discussions, conferences, seminars, and workshops the Centre has helped raise public awareness about various forms of life-writing. It also fosters biographical research through postdoctoral research fellowships, postgraduate scholarships, visiting scholarships, and visiting doctoral studentships.

“I am delighted, honored, and amazed,” Lee wrote BIO President Linda Leavell when informed she had won the BIO Award. “Thank you so much, and thanks to the committee. It is particularly exciting to be given this prize for the Life-Writing Centre here in Oxford as well as for my writing. I accept with pleasure.”

Justin Spring, chairman of this year’s Awards Committee, is the author of Secret Historian: The Life and Times of Samuel Steward (FSG, 2011), The Gourmands’ Way: Six Americans in Paris and the Birth of a New Gastronomy (FSG, 2017), and Fairfield Porter: A Life in Art (Yale University Press, 1999). A Finalist for the National Book Award and the recipient of many other prizes and honors, he has also held a Guggenheim Fellowship in Nonfiction Writing and a Leon Levy Fellowship in biography. He specializes in interdisciplinary and cross-cultural subjects.

Biography Beyond Borders Brings Together US and European Biographers

On November 4-5, BIO and the Oxford Centre for Life-Writing co-sponsored Biography Beyond Borders, a colloquium on American and European biography. The weekend in Oxford and London featured 29 distinguished biographers from across the United States and Europe examining their craft in lectures and panel discussions. Look for more news on the weekend next month. 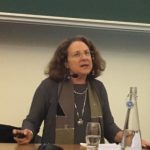 Carla Kaplan opened the weekend on November 4 with a talk on the life of Jessica Mitford, the famous American muckraking journalist who grew up in a British aristocratic family. 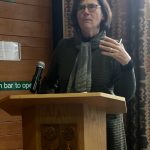 Hermione Lee spoke during lunch on November 5. Lee, who is president of Wolfson College, University of Oxford, where the Oxford Centre for Life-Writing is located, won BIO’s Plutarch Award in 2015. 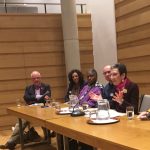 Presented by BIO in collaboration with the Oxford Centre for Life-Writing at
Oxford, Biography Beyond Borders will take place on Saturday, November 5. The
lunchtime keynote speaker will be the 2014 BIO Plutarch Award Best Biography
winner and director of the Oxford Centre for Life-Writing, Hermione Lee.
The $100 fee for the colloquium also includes a Friday afternoon lecture and
reception at the Centre for Life-Writing Research at King’s College, London,
featuring Carla Kaplan as the speaker. Her lecture is titled, “‘Something to Offend Everyone’: The Muckraking Life of Jessica Mitford.” In addition, anyone who wants to go on the BIO November 3 group tour of the Jacobean home of Rudyard Kipling and romantic Scotney Castle with royal guide Harold Brown and Will Swift should email Swift. Learn more about the tours and the entire weekend and register here.

In collaboration with the Oxford Centre for Life-Writing at Oxford, housed at Wolfson College and directed by Professor Dame Hermione Lee, Biography International Organization (BIO) is hosting Biography Beyond Borders, a colloquium on American and European biography. The colloquium is 9:30 a.m. to 6:30 p.m. on Saturday, November 5. Lee will deliver the afternoon’s keynote address, and distinguished American biographer Carla Kaplan will give  lecture the previous evening at the Centre for Life-Writing Research at King’s College, London. 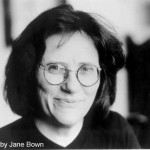