By John A. Farrell

Did liberal scholarship, degrading the principle of truth with postmodern theory, pave the way for Donald Trump’s duplicity?

Biographer Nigel Hamilton, a former BIO president, proposed as much in a biting address that launched “Different Lives,” a three-day conference on biography at the University of Groningen in The Netherlands, in late September.

“The White House was won . . . by a real estate developer committed to a platform of misogyny, hatred of immigrants, opposition to federal government, and greed-obsessed fantasy as preferable to reality,” said Hamilton. “Americans . . . are now living with the worrying outcome of that election—especially its implications for the concept of truth.”

Trump’s “Orwellian suppression of truthfulness” has roots in postwar postmodern and deconstructionist theories, Hamilton contended. Laudably, he said, biographers have resisted the call.

Organized by Hans Renders’s team at the Biography Institute in Groningen, with support from BIO and the Biography Society in France, the conference lured biographers from four continents and 18 countries.

The keynote address was given by British biographer Richard Holmes, winner of the 2018 BIO Award. The Dutch Biography Prize was given to Onno Blom, for his book on artist and writer Jan Wolkers. And the conference attendees were treated, midway through the program, to author Nick Weber’s stately, successful defense of his Ph.D. thesis on the painter Piet Mondrian.

BIO member Carl Rollyson spoke on the art of presidential biography. Writers from Iran, Russia, and Vietnam reminded attendees to not take for granted the immeasurable value of artistic freedom. Lindie Koorts of South Africa and Spain’s Maria Jesus Gonzalez gave instructive talks on how contemporary political issues affect the choices and interpretations made by biographers in their two countries.

Hamilton addressed issues of truthfulness and politics as well. We are “now confronting the effects of American cultural decay” symbolized by “a reckless administration of willful know-nothings,” he said, in a talk titled “Truth, Lies, and Fake Truth: The Future of Biography.”

Drawing from his own writings and experience, and quoting from critic Michiko Kakutani’s book, The Death of Truth: Notes on Falsehood in the Age of Trump, Hamilton traced a line from the more extreme forms of poststructuralism, deconstruction, and postmodernism—that paint history, political verities, and at times science as social constructions—to today’s “fake news” climate.

With a few exceptions, biographers have resisted, Hamilton said. In the discipline, “truth has remained a red line,” he contended, a reason that readers have turned to biography in its recent golden age, for its reliance on “verifiable facts.”

Biographers “hewed to what was biography’s lifeblood: non-fiction,” he said, and “were pressed to work harder than ever in their search of the truth about real individuals. Where footnotes and endnotes had once been considered de trop in biography, they now became mandatory.”

Biographers, resisting the lure of postmodern theory, are now “willing to work harder to find and authenticate sources, do new interviews, challenge and update earlier accounts—to do, in short, the intense forensic research . . . footnoted and endnoted, that had once been the prerogative of the academic historian.”

Joanny Moulin, the president of the Biography Society and a member of BIO’s Advisory Council, replied in part to Hamilton in his own talk on biography. “My take on biography is theoretical, because I am French,” he said wryly. Biographers may resist the extreme interpretations—and extreme criticism—of postmodern theory, Moulin said, but it is foolish to say that social constructs and other forces don’t guide the lives and choices of individuals.

Biographers cannot close their eyes to the implications and insights of modern theory, Moulin contended. The notion that we can “go back to the good old days—this is nonsense,” he said.

Lectures about the culture of biography in Canada, the Netherlands, Italy, and Indonesia were alternated by roundtables. During these discussions, there was a lively debate on propositions about censorship, the reception of biography, and the relationship between biography and history. Finally, David Veltman made some remarks about the political impact of artists’ biographies in Belgium.

This well-attended conference was prepared to the very detail by Hans Renders (another member of BIO’s Advisory Council), Madelon Nanninga-Franssen, and David Veltman. During the farewell dinner, they were frequently called upon to organize such an event again.

John Farrell is the author of biographies of Tip O’Neill, Clarence Darrow, and Richard Nixon. 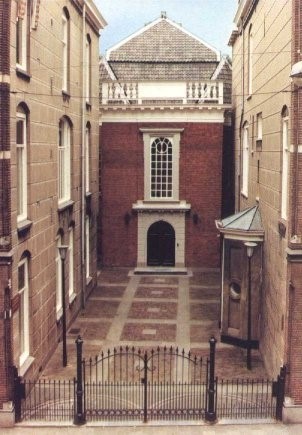 The conference will be held at the Doopsgezinde Kerk in Groningen.

On September 20 and 21, 2018, BIO will join the Biography Institute and the Biography Society in hosting the conference Different Lives: Global Perspectives on Biography in Public Cultures and Societies. This conference will take place in Groningen, the Netherlands, home of the Biography Institute, which is directed by BIO board member Hans Renders. The event will allow biographers to look beyond their own borders, explore how biography is practiced in other parts of the world, and discuss the cultural perspectives that guide biographers in their approach to the infinite complexity of the other.

With a mix of panel, roundtable, and public discussions, featuring speakers from many nations, this conference is designed to present the state of the art of biography from a wealth of different perspectives. Richard Holmes will deliver the keynote address, and BIO members participating include Carl Rollyson, John A. Farrell, and Nigel Hamilton. The latter will host a master class on Wednesday, September 19, for young biographers working on their first books.

Also on Wednesday, attendees can choose to explore two cultural sites in and around Groningen: Museum of Graphic Arts and Camp Westerbork, an exhibition depicting the Netherlands during World War II, focusing on the persecution of Jews.

Early-bird tickets for the conference are available until June 1, for 40 euros; after that, the price will rise to 60 euros. Attendees can also reserve a place at the conference dinner for 60 euros. If you require assistance in booking hotel or travel arrangements, email the conference board. Look for more information on the conference in future issues of TBC, and you can follow news of the event on Facebook at Different Lives Conference.