Writing the First Biography of Your Subject 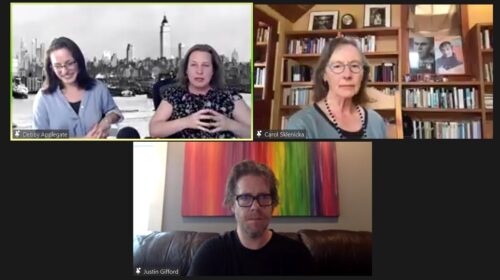 Panelists Justin Gifford, Abigail Santamaria, and Carol Sklenicka, along with moderator Debby Applegate, explored some of the challenges and rewards of writing the first biography of a subject.

Sklenicka started the discussion by noting both of her biographies—of writers Raymond Carver and Alice Adams—were the first about her subjects, and she’s never considered doing a second or third biography of a subject. She undertook the Carver book because her students wanted to know more about him, and she was ready to make the transition away from literary criticism “because biography is more fun, in my opinion.” She said that biographers considering writing the first biography of a subject should ask themselves why isn’t there one of that subject, and they should do research on whether someone else is working on a book about the subject. With Carver, Sklenicka heard there was a “big rift” between his two former wives, which may have put off potential biographers. Publishers like to know that you have the cooperation of a subject’s family or estate, but she said the lack of it is not necessarily a roadblock.

Gifford talked a bit about the proposal-writing process, saying one key is to have research no one has used before. “That can be in the form of archival research, or interviews with family members, or some other kinds of documents that you find.” The second thing you need, Gifford said, is something to hook the editor. “You need to convince [editors] that this
person . . . has some sort of impact on contemporary culture in some direct and significant way.” That was the case with Gifford’s biography of Iceberg Slim, whose writings influenced a generation of hip-hop musicians and helped shape contemporary Black culture.

Santamaria’s first “first” biography was of Joy Davidman, and while she had appeared in previous biographical works, it was usually in the context of her relationship with C. S. Lewis. Santamaria presented the first full biography of Davidman herself. The subject of her current work in progress, Madeleine L’Engle, similarly had been written about, but not in a full biography. Santamaria reiterated Gifford’s point about offering something new about a subject. She said a proposal also needs to show what makes the subject’s life interesting. With L’Engle, Santamaria was asked, was the author more than just her classic, A Wrinkle in Time—was her life interesting?

As all three panelists have written about authors, Applegate asked about the issue of getting permission to quote from their subjects’ works, which led to a discussion of fair use and the legalities that can go into writing a biography, especially when dealing with relatives or an estate. (Applegate noted that writing about long-dead subjects, as she has, is one way to avoid that hassle.) Sklenicka said biographers need to use fair use more than they do (and she plugged BIO member Carl Rollyson’s expertise on the subject). With her L’Engle book, Santamaria received permission up front from her subject’s estate to quote from her books. Gifford also had carte blanche from the beginning to quote from Iceberg Slim’s books, but for a biography of Eldridge Cleaver, he had to wait until the last minute to get permission. Gifford’s publisher was cautious about taking the fair-use route. The Cleaver experience convinced Gifford to not tackle another contemporary subject.

Applegate then asked how the biographers tackled the writing stage for a first biography, winnowing and shaping their material. Sklenicka said she needs to keep track of all her research material in one document, with cross references, while copies of letters go in a three-ring binder in chronological order. The key then, she said, is to find the shape of the story. “If you’re the first biographer, no one has pre-sorted it for you.”

Gifford talked about combining biographical information with vignettes that “give flavor or dimension to the subject of the biography.” He also said, “You have to decide what you believe before you write the biography.” For Gifford, his beliefs as a committed Marxist shaped what he had put in his books. Sklenicka agreed that biographers need to “know what [they] think” before getting too deep into a book and make that case in the writing.