Swipe Right for Your Subject: How Do You Know It’s the Right One? 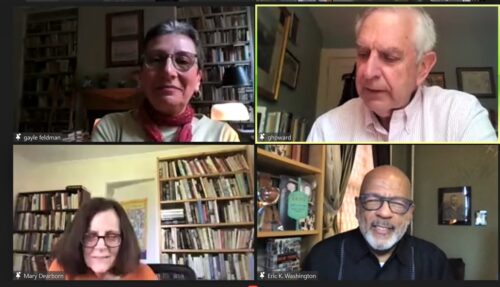 Moderator Gayle Feldman started this session by recounting a conversation she had with 2010 BIO Award-winner Jean Strouse, in which she asked for Strouse’s advice on beginning her career as a biographer. Strouse’s reply: “If you want to do biography the right way, and get it right, you’d better have chosen the right subject.” Feldman than asked panelists Mary Dearborn, Eric K. Washington, and Gerald Howard how they have chosen their subjects.

Washington said that he discovered his subject, James H. Williams, after he was asked in 2013 to lead tours of Grand Central Terminal, where Williams worked as the “boss of the Grips.” Washington had experience with New York’s hospitality and tourism industry and knowledge of the city’s history, and with Williams he “found a bond” that spurred an interest in learning more about how he integrated the Red Caps who worked in the terminal, not realizing that his research and writing about Williams would lead to full-length biography—and a five- or six-year “relationship.”

Dearborn, the author of several biographies, focused on how she came to choose Ernest Hemingway as a subject. Dearborn echoed Jean Strouse’s advice on the importance of choosing the right subject, adding that for her it can be a “fraught” process as well. After writing books about two figures who defined American masculinity in the 20th century—Henry Miller and Norman Mailer—Dearborn “knew it was coming” that she would have to tackle Hemingway, too. But she still had to struggle with her internal editor who asked, “Is there something new I should know about? Or aren’t there enough books about him?” Dearborn finally answered the latter question by saying, “Yes, except for mine.” She said, “You have to feel that you’re doing something new . . . you have to have that sort of passion that you’ll be saying something new”—or looking at material in new ways. Dearborn also became convinced that, as a woman, she brought new insights to Hemingway and could dispel the macho myth that surrounded him.

After a career as an editor, Howard is embarking on his first biography, about Malcolm Cowley. Howard had an interest in the writer that went back almost 50 years, saying that reading Cowley led Howard to realize “writers were actually people.” During his career, Howard met Cowley, an experience that awed him, and he was always on the lookout for someone to do a biography of the writer. He never found that person, so Howard finally decided he should do it. The process has convinced him that “writing a biography is really hard, folks . . . it’s a lot harder than editing one.”

Given his publishing background, Howard had some experience with how to choose the right subject. He offered some “considerations” for choosing a subject, but the bottom line is: “how badly you want to or need to do this.” A publisher wants to “feel the passion in the proposal.” Feldman noted that for all three panelists, the idea of passion or a “sense of mission” was a driving force in choosing the subjects they did.

Feldman next asked about practical considerations, balancing the passion with such concerns as time and money. Washington said that he was slightly naïve when he began writing about Williams, thinking, “this will be a breeze!” But he realized he needed to dig deeper to truly tell the story. Winning a Leon Levy Center for Biography Fellowship helped with that deep dive. Along with time and money, he said, some of the other practical issues biographers confront include: What sources are there and where are they? And will there be opposition from the family?

Dearborn said, given the state of advances today, there’s not much practical about writing a biography. “I think I make my decisions in spite of practicality.” But she agreed with Washington that assessing potential conflicts with a family or estate is one practical matter to consider.

Looking at the economic challenges of writing a biography, Howard said would-be biographers need other ways to finance their projects, such as by going into academia or tapping into grants and residencies.

Feldman asked if biographers should be in love with their subjects and can they fall out of love with them. Dearborn said she fell out of love with Norman Mailer, though usually feelings like that are less extreme. And with Hemingway, she wanted to address his faults and failings, but in a balanced way; she didn’t want to write a negative biography. At times, she even felt protective of him. “It’s real complicated, isn’t it,” she said. Washington explained he wasn’t in love with his subject, but he found “a sense of commonality” with him. With Cowley, Howard said, nothing he’s found has “dimmed his esteem” for his subject. But Howard has had to confront Cowley’s “political idiocy” as a Communist fellow traveler during the 1930s. “I don’t want to become Malcolm Cowley’s scold, but I do have to hold the political mistakes he made to the light of day.”