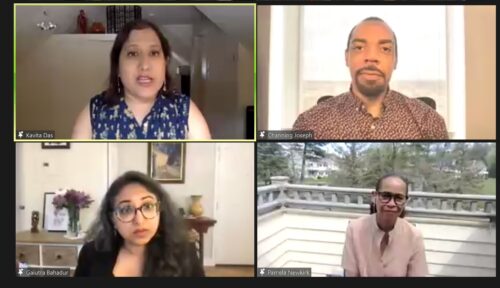 This panel continued the morning’s plenary discussion, delving deeper into the particular challenges and rewards of researching overlooked and marginalized lives, particularly people of color and those who identify as LGBTQ.

Moderator Kavita Das kicked off the discussion by asking what drew the panelists to their subjects. Pamela Newkirk said the idea to explore the subject of her book Spectacle: The Astonishing Life of Ota Benga came from her agent. Benga was a young Congolese man who was captured in his homeland and taken to the United States, where he eventually became a human exhibit in the Bronx Zoo monkey house. Exploring his life intersected with Newkirk’s interest in race relations in New York City during the Progressive Era. She quickly learned that newspaper reports of the time did not square with what was in the archives. What she found shocked her, and she was “compelled to tell the story after I saw the way so many powerful people had for 100 years told this story through lies and deception”—especially officials at the Bronx Zoo.

For Channing Gerard Joseph, tracking down his family’s genealogy led him to his subject, William Dorsey Swann, a former slave who in the late 19th century became the world’s first self-described drag queen. His research led him to wonder “what would a Black, queer, ancestor look like” and to a larger hunt for Black homosexuals from the past who defied gender conventions of their era. Joseph found an article from 1888 about a raid at a drag ball that Swann hosted. When Joseph saw that other scholars didn’t know about this raid or Swann, he decided to tackle the subject. Newspaper reports from the era about other raids gave Joseph names and sometimes addresses, leads that brought him to census records, city directory records, and other sources of information about Swann and his activities. One challenge, though, was that newspapers often used variations of Swann’s name when reporting on the raids, so he had to spend time making sure a “William Dorsey” who was mentioned was actually William Dorsey Swann.

Gaiutra Bahadur’s desire to explore a forgotten or overlooked figure began with her great-grandmother, who at the beginning of the 20th century traveled from her native India to Guyana as an indentured servant. What Bahadur discovered fascinated her, but realizing there was not enough information for a book just on her relative, she expanded her scope to look at other Indian women who made the same journey. The finished product was Coolie Woman: The Odyssey of Indenture. Bahadur said of the women she discovered, “They’re all forgotten figures,” and so telling her great-grandmother’s story reflected the experience of so many others.

For all the panelists, finding material about their subjects was a challenge. Newkirk offered a piece of advice for researching the lives of marginalized and overlooked subjects: “Look to the papers of the person who exploited them.” In the archives, she found the letters of those oppressors, “candid accounts of what was happening to [Benga] behind the scenes,” which even outlined the lies these people would tell to deceive the public about him. She was fortunate, she said, that the powerful people of the era communicated via letters and were the people whose papers were collected and saved in archives, leaving a trail she could follow.

Joseph also found that looking at the powerful people whose paths crossed those of the marginalized helped him find useful information. His research sometimes led him to the papers of movers and shakers in Washington, D.C., where Swann lived. Some of them employed the drag queens in Swann’s circle, so their writings offered more clues about Swann and his friends.

Bahadur knew from the start that women like her great-grandmother were not the type of people who had their lives recorded and written about. But what she did know about her great-grandmother’s life led her to sources that gave her a broader picture of the lives of indentured women. Bahadur looked at colonial records of other ships that made the journey from India to Guyana and was able to “excavate stories of particular women . . . to describe what happened to them but also imagine her [great-grandmother] into their lives” and experiences. Bahadur also saw the value of the “papers of the powerful,” but in her case, the depiction of women in them, written by men, did not leave an accurate picture. She relied on oral histories of the surviving indentured servants and family histories to help fill in the gaps.

On the practical matter of pitching the story of an overlooked person to a publisher, Joseph said biographers need to be able to answer the question “Why would the average person be interested?” in two sentences. Newkirk said it can help if the subject’s life taps into larger issues or gives readers a new way to see things through that life.

Why write about marginalized lives? Newkirk said there is a renewed interest in those stories, and looking at these lives gives insight into the true history of the United States: “You can’t tell the story of this country when you have excised these people from the record.” She added, “All these lives mattered,” which prompted Joseph to say, “It’s amazing we have to say it.”