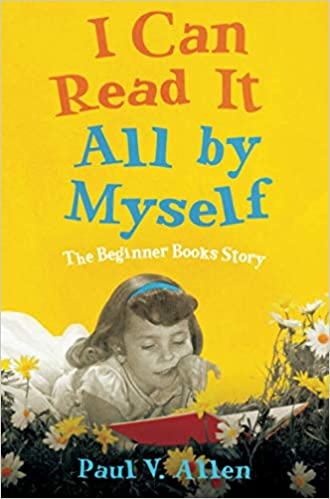 I Can Read It All by Myself is Paul V. Allen’s third book.

Last month, we missed the publication of I Can Read It All by Myself: The Beginner Books Story by Paul V. Allen, a comprehensive history of Random House’s Beginner Books line of early readers that started with The Cat in the Hat in 1957. Paul told us, “While not a strict biography, it does have dozens of biographical sketches of the writers and artists who brought the line to life.” Out in paperback this month is These Fevered Days: Ten Pivotal Moments in the Making of Emily Dickinson by Martha Ackmann, a finalist for the 2021 Plutarch Award. Two members top this month’s “Sold to Publishers” list: Paula Broussard and coauthor Lisa Royère have a contract for Eleanor Powell: Born to Dance and Susan Page has sold Fascinating People: The Life and Times of Barbara Walters. Susan, along with Mary Dearborn, was featured in the article “Big 10, Chapter 2: Best-selling Biographers Share What They Learned About Their Subjects” in the News-Gazette of Champaign, Illinois. Susan discussed her The Matriarch: Barbara Bush and the Making of an American Dynasty and Mary discussed her Ernest Hemingway: A Biography.

Marc Leepson’s latest Dispatches livestream interview for the VVA Veterans magazine featured Tim O’Brien. You can see it here. Marc also did a Zoom talk on the history of the American flag for Context Conversations, based on his book Flag: An American Biography. James McGrath Morris wrote “The Best Books on the Spanish Civil War” for the website Shepherd. Heather Clark and Hermione Lee were featured on an episode of the “Writing Lives: Biography and Beyond” podcast from the Oxford Centre for Life-Writing. Books & Books in Miami and the Miami Book Fair presented Hermione in conversation with Stacy Schiff, discussing Hermione’s Tom Stoppard: A Life. Hermione also did an interview about the book on The Stage Show on Australia’s ABC Radio National. Marian Janssen wrote “Carolyn Kizer: Cultural Czarina at NEA” for the website Berfrois.  Vincent DiGirolamo wrote “Valor Roll: American Newsies in the Great War and the Flu Pandemic” for the History News Network. For her Madam Mayo blog, C. M. Mayo interviewed David O. Stewart about his George Washington: The Political Rise of America’s Founding Father. David wrote “George Washington Struggles with Slavery” for American Heritage. Peniel E. Joseph wrote “This Late Civil Rights Icon’s Imprint Is Everywhere Today” for CNN. Lisa Napoli discussed her Susan, Linda, Nina, & Cokie: The Extraordinary Story of the Founding Mothers of NPR on Studio Tulsa, a production of Public Radio Tulsa.

Bob Batchelor appeared on the “Pop Culture Tonight” podcast to discuss his Stan Lee: The Man Behind Marvel.  Bob also appeared on another episode of “TriState True Crime,” broadcast on television station WCPO in Cincinnati. Robert Marshall coproduced the podcast “Trickster,” about Carlos Castaneda, the subject of Robert’s forthcoming biography. The podcast has been downloaded in 120 countries. Kai Bird appeared on NPR’s Morning Edition to discuss his The Outlier: The Unfinished Presidency of Jimmy Carter. For the website Air Mail, Kai wrote “Aide- Mémoire.” Marlene Trestman wrote an entry of her subject Bessie Margolin for the The Shalvi/Hyman Encyclopedia of Jewish Women. Sallie Bingham discussed her The Silver Swan: In Search of Doris Duke at an event sponsored by the Friends of the Santa Fe Library. For the website Diverse Verse, Ray Shepard wrote a poem about why he writes biography. Bernice Lerner wrote “Lessons From My Father, a Former Slave Laborer” for The Times of Israel. She also took part in an event hosted by the Boston BookLab, discussing her All the Horrors of War: A Jewish Girl, a British Doctor, and the Liberation of Bergen-Belsen. Julian Zelizer wrote “The Story of January 6 Will be Told” for the History News Network. For Bloomberg, Taylor Branch wrote “Will Joe Manchin Be a Voting Rights Hero?” Arthur Hoyle reviewed two books for the New York Journal of Books: Philip D’Anieri’s The Appalachian Trail: A Biography and Buñuel in the Labyrinth of the Turtles by Fermin Solis. Carl Rollyson reviewed Anne Sebba’s Ethel Rosenberg: An American Tragedy for “Datebook” in the San Francisco Chronicle. On his podcast, Carl hosted Carol Sklenicka, who discussed her Alice Adams: Portrait of a Writer. For Pride Month, the website QBurgh ran a version of Anya Jabour’s article, “When Lesbians Led the Women’s Suffrage Movement.” The original article was published in 2020. Congratulations to Brett Dakin, whose American Daredevil: Comics, Communism, and the Battles of Lev Gleason was nominated for an Eisner Award in the Best Comics-Related Book category. The Eisner Awards are considered the Oscars of the comic-book industry.