Thank you to everyone who participated in the Seventh Annual BIO Conference in Richmond, Virginia!

You can see the program from the conference below.


President-elect Will Swift’s inaugural address to BIO members at the 2016 BIO conference in Richmond, Virginia. 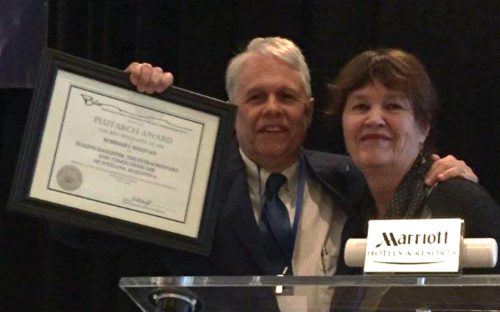 Stalin’s Daughter: The Extraordinary and Tumultuous Life of Svetlana Alliluyeva. Members of Biographers International Organization selected the winning book, which was announced at the Seventh Annual BIO Conference on June 4 in Richmond. Stalin’s Daughter had previously won several other honors, including the 2015 Hilary Weston Writers’ Trust Prize for Nonfiction and the 2016 RBC Charles Taylor Prize for Nonfiction.

Sullivan said she was “totally astonished” to win the Plutarch, noting that, “It doesn’t get better than to be recognized by your fellow biographers.” She called biographers “metaphysical detectives” who ask, “What is a life, how was it lived, and what did it mean.” A biography must have “the narrative drive of fiction” while keeping “the integrity of the research,” she said. That research often reveals information “more bizarre, more inventive, more daunting than fiction.” Sullivan said she is particularly interested in “the book beneath the book, the book that the reader will never get to read—the adventures of the biographer” as he or she explores a subject’s life. When she realized there was no biography of Alliluyeva, she “took the leap,” visiting four countries to conduct interviews and dig into archives. “The search for another life,” she said, “adds to your own narrative.”

The Plutarch Award Committee originally chose ten semi-finalists before selecting four finalists. The other finalists were:

You can see the complete list of this year’s semi-finalists and past winners here.

This year, for the first time, BIO also gave special awards for excellence in four categories to books that the Plutarch Committee considered but did not place on the list of semi-finalists. The categories and the winners were: 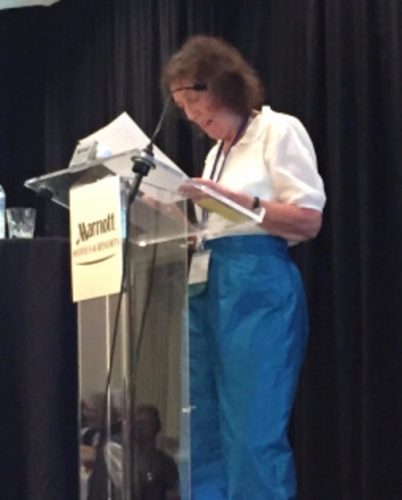 More than 150 established and aspiring biographers from three continents immersed themselves in their craft at the Seventh Annual Biographers International Organization Conference, held June 4 in Richmond, Virginia. Along with the announcement of the Plutarch Award for 2016, the day’s highlights included a keynote address by Claire Tomalin, winner of the 2016 BIO Award, and a discussion between Pulitzer Prize winners Annette Gordon Reed and T.J. Stiles on balancing historical research and literary craft.

Tomalin—whose subjects include Mary Wollstonecraft, Percy Bysshe Shelley, Jane Austen, and Samuel Pepys—was introduced by former BIO Award Winner Stacy Schiff, who said she has read Tomalin’s work “with awe and amusement, for pleasure and instruction.” Schiff called Tomalin’s style “cool, crisp, and light,” and said she can serve as an inspiration and guide to other writers, with her “sixth sense of when to assert or restrain herself.”

In her keynote address, Tomalin said that “even obscure lives can be interesting,” but convincing publishers of that can be hard. She went on to list some of the critics of the biographer’s craft over the years. Tennyson, she said, saw biographers as savages who try to rip open their subjects as if they were pigs, while George Eliot called biography “the disease of English literature.” Tomalin admitted that “no one likes to be summed up.”

Still, Tomalin sees value in the biographers’ quest to settle matters of fact about a subject’s life as best as they can. Their job is to question an autobiography or “official” biography and focus on the shape of a subject’s life while putting it into a historical and cultural context. Another crucial function for biographers, Tomalin said, is to “seek to do justice to one who has not received it.” Tomalin also stressed the need for biographers to “extend our understanding of the interaction between private and public life.”

Tomalin became a biographer relatively late in life, but with the genre she found her writing niche. She learned from her subjects that “work keeps people alive.” She also discovered how deeply her subjects’ lives affected her: “That companionship was something I had not expected…. They have become a central part of my consciousness.”

Historical Research and Literary Craft
The conference began Saturday morning with the breakfast plenary session featuring Annette Gordon-Reed and T.J. Stiles. Gordon-Reed, a professor of both law and history at Harvard, is best known for her work on Thomas Jefferson, his personal life with Sally Hemings, and his era. Stiles started off pursuing an academic career in history before becoming an independent scholar. His biographies have examined celebrated nineteenth-century American figures: Jesse James, Cornelius Vanderbilt, and George Custer. The two addressed how to balance historical research and literary craft in the context of writing a biography.

Each saw benefits in the genre, with Gordon-Reed noting that “biography has the advantage of having a structure,” through the progress of a subject’s life, though biographers don’t have to examine that life in chronological order. Stiles said one of the advantages of biography is that a writer can write about big questions through the examination of one person’s life. And because of the structure provided by a subject’s life, Stiles sees biography as “an inherently literary as well as scholarly or journalistic form.”

Speaking as an academic and a historian, Gordon-Reed said most of her colleagues stress research over literary craft, which is perhaps why some disparage biography a bit. She emphasized, however, that “biography is history.” Stiles agreed and described the transition away from the Great Man approach to writing history that was common before the 1960s to an emphasis on examining the roles of more anonymous people and groups. That approach works in biography, too; when writing about a Jefferson or a Vanderbilt, the biographer needs to keep in mind “who else is in that room with the titanic figures.” Gordon-Reed said that those other characters “are not just props… They have to matter.”

Turning specifically to research, both writers talked about the mass of information biographers tend to gather during that process. Gordon-Reed cautioned against “research euphoria,” and said she has had to make cuts in her work. She keeps a file of that deleted information, with the intention of using it again in another work. Stiles said doing a lot of research is not wasted, “and you have to be willing when you’re doing research to run into dead ends…. That’s the only way you’re going to find the good stuff.”

As far as creating narratives that draw readers in, Stile said he was influenced in part by reading adventure stories as a boy, which led him to wonder, “What happens next?” As with fiction or drama, readers of biographies want to know what’s at stake for the subject. They also want to be drawn into a “fully realized, believable world.” The biographer needs to find information and interpret sources to create that world.

For Gordon-Reed, reading fiction is important for developing the skills to write engaging nonfiction. Some people “want to write, but a lot of times they don’t want to read… and you can tell by the way they write.”

Pre- and Post-conference Events
While most of the conference’s events and festivities were on Saturday, about 30 attendees in Richmond explored some of the city’s historical sites on Friday. Some went to Hollywood Cemetery, while others visited the Virginia Historical Society or the Library of Virginia. The library was also the site of readings, with 18 attendees sharing snippets from their latest works. After, attendees gathered at the library for the pre-conference reception. Ellen Brown presented the Biblio Award to David Grabarek of the Library of Virginia. This annual award recognizes a librarian or archivist who has made an exceptional contribution to the craft of biography.

Next up was BIO vice president Deirdre David, who described the upcoming Biography Beyond Borders event that will be held in London and Oxford on November 4–5. (You can read more on the event here.) David was followed by BIO president Will Swift, who presented gifts of appreciation to outgoing officers Brian Jay Jones, Cathy Curtis, and Barbara Burkhardt.