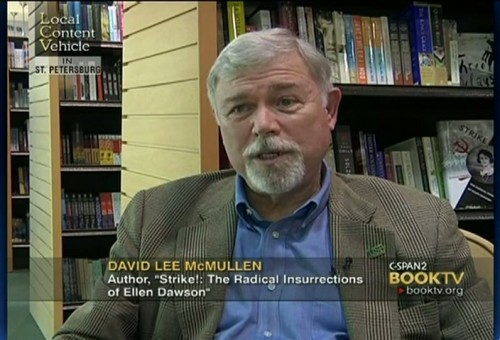 Experience is the fuel of good writing.  During the past half century, McMullen has been a vice cop, Marine Corps tank commander, VISTA volunteer, newspaper journalist, speechwriter, media spokesperson, lobbyist, association manager, public relations executive, Mr. Mom, barista and university professor.  Through it all, writing has been his passion.  His articles, essays, short stories and poetry have been published in a wide variety of regional and national publications, as well as an assortment of internet sites.
In 2010 his first biography was published.  Strike! The Radical Insurrections of Ellen Dawson is the story of a young woman who immigrated from Scotland to the United States, where she became a prominent communist labor activist during the 1920’s. McMullen is working on a second biography, the tale of two of Dawson’s associates – Albert and Vera Buch Weisbord – an American couple who devoted their lives to the causes of the radical left.
McMullen earned degrees from Florida State University (B.A.), where he studied with Michael Shaara, Pulitzer Prize winning author of Killer Angels, Northwestern University (M.A.), and the University of Aberdeen, Scotland (Ph.D.).  He taught writing and history at universities in North Carolina and Florida.
He currently resides in his native Florida, although in past years he has lived in Chicago, North Carolina, Alabama, Texas, Scotland, France and Mexico.  He is married to Cindy Wilkinson McMullen, a retired bank executive, and they have two sons – Tavish, a well-educated waiter and snowboarder in the mountains of Colorado, and Toby, a stand-up comic in Chicago.